My home town of Minneapolis is about as close to a cyclists paradise as one could find in a major US metro area. Mainly because you can get just about anywhere in the city on dedicated bike paths and boulevards and when you do have to share the road, car traffic respects the cyclists right to the road by virtue of the sheer number of cyclists, combined with a bit of Minnesota Nice.

However, Minneapolis also suffers from an over abundance of cycling hipsters, as evidenced by the number of fixed gear bikes outside every Uptown watering hole and coffee shop. Here at the Rakish Ride we celebrate a different kind of cyclist. 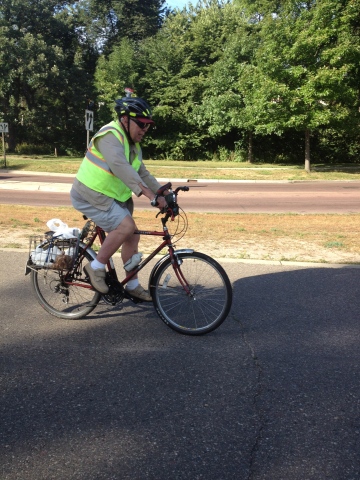 Case in point is the guy in this photo. First off the guy is 60 if he is a day and still getting around on his bike, and he was playing classical music on some sort of portable music player that made me want to slow down and smell the flowers when I pulled up behind him. More importantly he is piloting a very utilitarian ride; A vintage mountain bike with a rear rack and basket, well stocked with bungee cords and re-cycled plastic bags for his shopping, fenders, a rear view mirror, a big headlight setup and a flasher light mounted to his helmet. His cycling ensemble includes the classic yellow visibility vest, reflective stickers on his helmet and elsewhere, velcro secured shoes, a baseball cap under his helmet, cargo shorts…etc.

Now maybe I’m just getting to be a bit of a geezer myself but when I see a guy like this, who is obviously a hard core cyclist and has probably been for a long time, I think he is about a million times cooler than the 20 something dude on yet another classic bike that has been pointlessly converted to a “fixie”, riding without a helmet in tight jeans and with handlebars so narrow there is barely room for two hands, because he always has a PBR in one hand anyway.